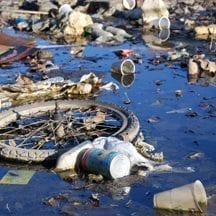 We are going to end our “water myth” series with the single biggest water myth of all time. The myth is that you believe that your tap water is safe because your local government says so.

The Legal Definition of Safe…

In 1985, Congress passed the Safe Drinking Water Act. This law defined the maximum contaminant level for about 100 different contaminants that can be in water. That sounds good, right? Cities are now supposed to meet these standards on the 100 different contaminants. But what if there are dangerous chemicals in the tap water that are not on the list? It doesn’t matter! If cities meet these 100 standards they can legally call their tap water “safe drinking water”, regardless of what else is in the water!

Consider that today there are over 84,000 different chemicals registered with the Environmental Protection Agency, over 3,000 different high-volume chemicals, 20,000 different pesticides with over 900 active ingredients, and over 2,000 new chemicals made each year, and yet cities only have to test for and meet standards on 100 different contaminants. Legally, it doesn’t matter that the city of West Palm in Florida, Chicago, New York, Omaha, San Diego and many other cities around the US have been found to have high levels of dangerous carcinogenic (cancer causing) chemicals in their tap water. They are still able to call their water “safe” because all of those cities meet the criteria on the 100 different contaminants defined in the Safe Drinking Water Act.

If a person or company did this it would be called deception. If a country does it it’s called the law.