Water is able to dissolve many substances to a greater or lesser degree and as such can become contaminated readily. As contaminants in the water supplies are frequently not visible to the naked eye, a consumer drinking water produced by a purification device needs to have the assurance the device will be effective in removing or significantly reducing a broad spectrum of contaminants.

Pure & Secure, LLC. manufactures and markets stainless steel devices with the expressed purpose of reducing contaminants from water and making the resulting water suitable for drinking.  The water distillation systems combine the process of steam distillation, where the feed-water is heated to boiling, the steam is collected, removed, and cooled to form distilled water. Then water passes through carbon filtration to improve taste and to remove any residual organic carry over. The testing in this report was carried out on the complete distillation systems; a distiller in conjunction with the carbon filter.

The services of Midwest Laboratories, Inc. were engaged to conduct a comprehensive evaluation of the ability of two popular distiller models to remove contaminants from water and to produce high purity drinking water. 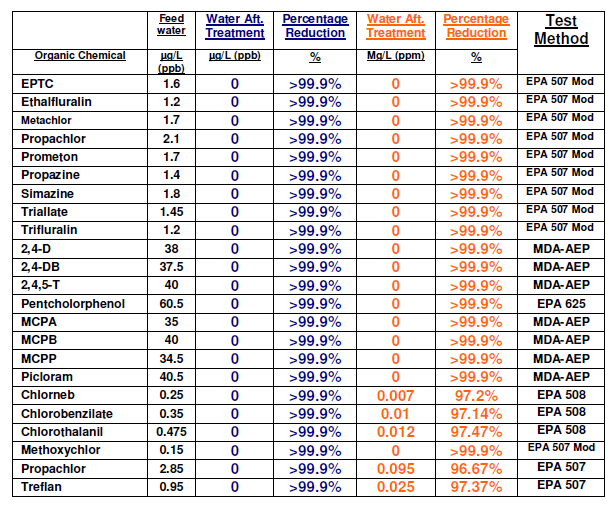 The pollutants were added to the water at concentrations ten to twenty *times the regulated level in the USA. Upon addition to these chemicals, the tank was blanketed in Nitrogen and mixed by rocking back and forth. Samples of contaminated water were taken from the tank and analyzed in duplicate.  Following the collection of feed-water samples, a feed line pump was activated and raw contaminated water was fed to each of the water distillation systems under test. The distillers of each model were activated and permitted to operate for even hours. At the end of the period, samples of water were drawn from the storage vessel for product water from the distillation system and analyzed in duplicate. The protocols used for the testing were United States Environmental Protection Agency (USEPA) and methods obtained from the Standard Methods for Examination of Water and Wastewater and results validated using a stringent quality control program. Results reported are the mean of two analyses. The Microbiological contaminant reduction utilized the widely accepted protocol detailed in the National Sanitation
Foundation (NSF) Standard 62 Annex C.

Note: the contaminants listed in these tests are not necessarily present in the drinking water of the reader.

Pesticides are commonly used by agriculture industries, homeowners, golf-courses, and a variety of other applications. Levels of pesticides have been detected in ground water in many parts of the USA and throughout the world. A diverse number of commonly used herbicides and pesticides were tested, with most contaminants removed in excess 99%. The diverse types of pesticides removed demonstrates the effectiveness of the units in any part of the United States and abroad. 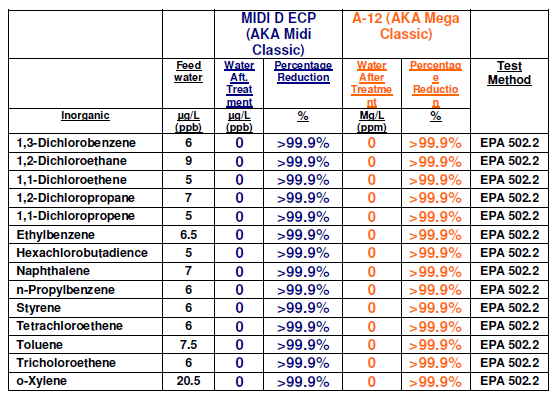 Most City water supplies do not contain measurable levels of volatile or semi-volatile chemicals. However, private wells can become contaminated from a variety of causes. The above data indicates that both units are effective at removing a large number of organic contaminants. Some of the contaminants are found in gasoline fuels, paint thinner, cleaning agents, and residues from a wide assortment of manufacturing processes.

Both the Pure Water Midi D Model ECP, Forerunner of the Midi Classic, and a Pure Water A-12 Distiller, Forerunner of the Mega Classic Distiller eliminate Bacillus. Bacillus Subtilus is used as a surrogate indicator. The removal of the Bacillus Subtilus spores generally recognized as an indicator of the removal of the following biological contaminants from water: K. terrigena (bacteria), the Polio and Rota Viruses, and Giarda and Cryptosporidia Protozoa.

Table 2 lists the results of Contaminants reduction for inorganic Contaminants from a spiked feed-water sample. 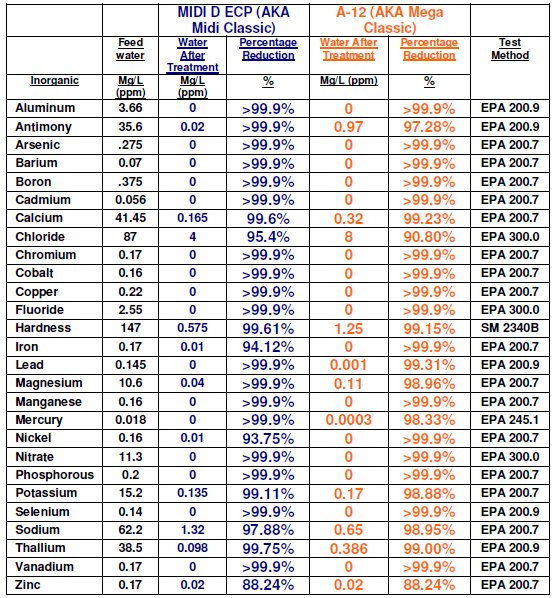 Removal of Organic Contaminants from Water

Organic Compounds contain a carbon atom in their chemicals structure. This group consists of thousands of different entities, many derived from the petrochemical industry. Common Organic Contaminants include cleaners, herbicides, pesticides, and industrial process wastes. Table 3 and 4 show the effect on organic and pesticide contaminants in water after treatment by the Pure Water Midi D Model ECP, Forerunner of the Midi Classic, and a Pure Water A-12 Distiller, Forerunner of the Mega Classic Distiller. A number of organic chemicals are regulated by the EPA. 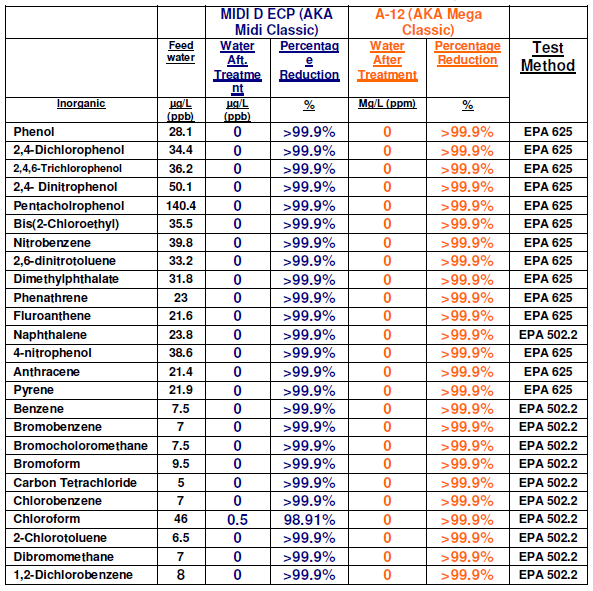 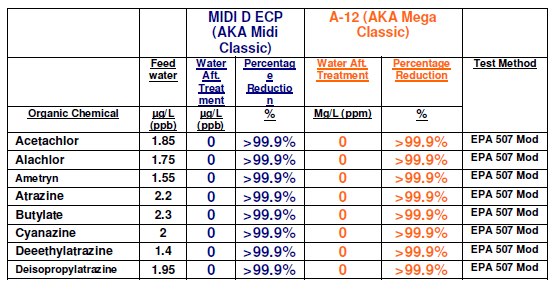 Removal of Microbiological Contaminants from Water

Laboratory testing shows both units produce drinking water of much higher results than the standards established by the U.S. Environmental Protection Agency.