As the final article in our series on the dangers of fluoridation, one of the most important aspects we want to address is the effectiveness of distillation in removing fluoride compounds from drinking water. In independent laboratory testing of our distillers, the data showed greater than 99.9%+ removal of fluoride (they never say 100% removal).

Anyone who understands the process of distillation can easily predict the excellent results of our premium water distillers. Here’s why… 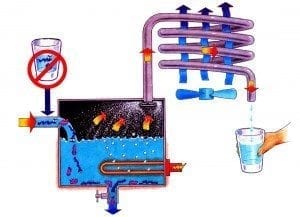 Distillation is the process of boiling water in order to turn liquid water into steam. When water is turned into steam it lets go of what it’s holding onto. Distillation then converts the pure steam back into liquid water, in a separate container. So in effect, instead of removing contaminants in water, distillation actually removes the pure water from the contaminants.

At standard temperature and pressure, (sea level), water (pure water that is) boils at 100° Celsius (212° Fahrenheit).  Impurities in the water, whether organic or inorganic, elevate the boiling point and lower the freezing point from what it would otherwise be.  If one of the impurities happens to be sodium or calcium fluoride, it would be left behind in the boiling chamber during distillation.  This means that distilling raw water, softened or unsoftened, will remove the fluoride in any form.

Read more about distillation and how to remove fluoride from water.