The publicity surrounding the earthquake and tsunami related breach at the Fukushima nuclear power plant in Japan, and the radiation leaking into the environment has resulted in lots of media publicity.  At the same time, but given less press has been reports of concerns that terrorists may use dirty nuclear devices in the USA.  All of this should get people researching the issue and the terms that are used.

I will try to bring some information into focus here and give you links to various website that will provide much more information.  I encourage you to spend some time surfing around Google.

We all have been exposed to levels of radiation during our lives.  Some of this is natural and other radiation is man-made.  Radiation is probably the most insidious of all pollutants. It is all around us yet we cannot see it, taste it, or feel it.  It can be in the air we breathe, the water we drink and the food we eat.  We know at certain levels it can be dangerous.

Many of the early researchers into radiation actually died from radiation exposure.  One graphic example arose when a number of women who were employed to apply luminescent paint to the faces of watches (so the wearer could read the time in the dark). Apparently the women were putting the brushes in their mouth to bring the brush hairs to a point. In the process they swallowed radium.  Over a two-year period, nine women who had worked as dial painters died of severe and unexplained anemia, accompanied by destructive lesions of the mouth and jawbones. A dentist who had treated one of these women finally made the connection between inflammation of the jawbone marrow, and the radium dial painting. There are dozens of chemical isotopes which are radioactive. As a group they are called radionuclides.

Radionuclide sources are many, but you may be surprised by some of these.

Primordial Radionuclides.   Resulting from the creation of the world and universe and locked up in the earths crust. They are long-lived with “half-lives” of hundreds of millions of years. Examples are Uranium 235, Uranium 238, Potassium 40.

Cosmic radionuclides:  Cosmic radiation permeates all of space and consists of high speed heavy particles, high energy photons and others.  The Earth’s upper atmosphere interacts with this cosmic radiation to produce radioactive nuclides. Examples are Carbon 14, and Tritium

Human Produced Radionuclides: Since the discovery of radioactivity, humans have used radionuclides for weapons, power generation and medical uses (and of course the ill-fated luminous paint on clocks and watches). Although low in the overall radiation exposure picture, the human produced radionuclides are the fastest growing.

Natural Radioactivity in Soils.  Primordial, cosmic and human-produced radionuclides are found in soil.

Natural Radioactivity in the Oceans.  All seawater on earth has some nuclides in it.

Whether we like it or not, we are all exposed to radionuclides, generally without knowing it.

The National Council on Radiation Protection and Measurement (NCRP) studies radiation and has tracked radiation exposure for many years.  It  was already increasing before the Fukushima nuclear problem, but most of the increase was coming from the increased use of radiation in medicine and medical procedures (CT scans for example). 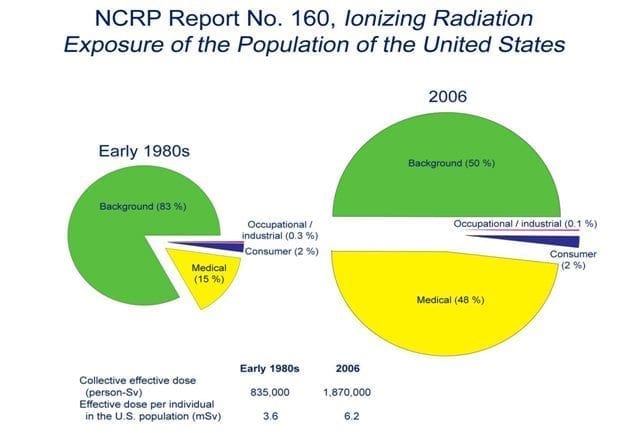 I will do more on this topic in the next week or so but in the meantime take at look at these websites: