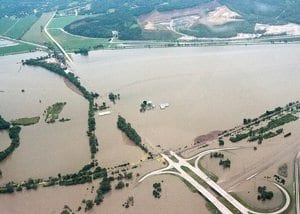 In reality, it’s a small total compared to the massive amount of water flowing along the flooded river daily.  But Omaha was likely not alone.  Other small towns, and farms were flooded and as a result biologically-charge pollutants were part of the run off into the Missouri.

The official statement on these releases from government entities are almost predictable.  They go something like this “We had to release raw sewage into the Missouri River today so stay off the river for a while until it is sufficiently diluted”   Lately I’ve noticed the Environmental Protection Agency (EPA) has been levying huge fines against companies who have violated EPA rules.  I haven’t compared the case histories of these in depth to see if there is some apples to apples comparison but I daresay that if the private sector released 9 gallons of animal sewage into the Missouri River, or even 1 million gallons for that matter, there would be a public outcry and likely an investigation.  I’m sure there would be fines levied and perhaps the Chief Executive would be charged with negligence.  Is this a double standard or am I missing the point somewhere here?

Having got that off my mind, I’ll go back to the impact of the Missouri River flooding on people and the environment.  Roads and highways have to be replaced, bridges have to be reinforced or replaced, and the damage to homes and farm buildings is imply awful.  But there is another side to it.  During the flooding and its aftermath there has been raw human sewage,  feedlot run off, farm chemicals including pesticides and fertilizers, dead animals and much more.  What a wonderful environment for bacteria and viruses.  Make no mistake, the environment toll has been heavy.  Is the human health toll far behind?  That’s why I’m such a lover of distillers.  The distiller is a water purification system that boils the water as it purifies it.   I don’t worry about my family, or our friends with a distiller.  It’s everyone else I’m concerned about.  Take matters into your own hands and at least do the research into our premium distillers.  You’ll be glad you did.  Go to: www.MyPureWater.com