Atrazine can be applied to crops before, during or after planting of seeds, or even after the crop emerges. It is most often used at low rates in tank mixes with other more specialize products to provide total, season-long control.  By 2004, 80% of broad spectrum herbicide treatments evaluated contained  atrazine.

One of the very attractive properties of atrazine is that it is not subject to volatile drift from the site of application like many other herbicides. Today it is the most widely used herbicide in the United States. Coincidentally (and sadly I might add), it is also the most commonly detected water contaminant in the United States and has led to some attempts to ban it use.

Atrazine is especially useful for killing the weeds and grasses that interfere with the growing of corn, sorghum, sugar cane and other farm crops. It is also used on golf courses as well as residential and commercial lawns. In the next few months this chemical will be applied quite liberally on thousands upon thousands of acres of cropland, especially in the Midwestern region of the United States.

Atrazine, which was first registered for use in the United States in 1959, is produced by a Swiss agro-chemical company, Syngenta.  Eighty million pounds of this chemical is used in the United States annually. It is interesting to note that because of its potential dangers, this herbicide was banned in several countries in Europe as early as 1991 and has been banned in the entire European Union since  2004!

What are the dangers of this potential water contaminant? While Atrazine does a super job of protecting crops and lawns, it threatens many other species…including man. It is a potent endocrine gland disruptor.  This means that it suppresses the immune system and can cause hermaphroditism.

It can even cause a complete sex reversal in male frogs at concentrations as low as 2.5 ppb (parts per billion or micrograms per liter).  This is well below the 3.0 ppb which the EPA says is safe!  This is a particularly acute problem because amphibian populations worldwide have been declining at such astounding rates that today nearly one-third of the world’s amphibian species are threatened with extinction!

In addition, atrazine has been linked to reproductive defects in fish.  Prostate and breast cancer has been reported in laboratory studies on rodents (rats). This also suggests that atrazine is a human carcinogen as well, and most likely leads to other health issues.  For example, researchers are finding an increasing number of links between atrazine and poor birth outcomes in humans. A study in 2009 found a significant correlation between pregnant women consuming drinking water containing small amounts of atrazine and reduced body weight in their newborn babies. (Low birth weight is has been associated with increased risk of infant illness, and also latter on, such conditions as diabetes and heart disease.)

Because of the various health threats associated with atrazine, one of the first class action suits ever, involving a water contaminant was initiated some eight years ago in the state of Illinois, against Syngenta Crop Protection and Syngenta AG. As reported at the time, by the Madison-St. Clair Record, the lawsuit was successfully settled in October of last year, by a United States District Court judge for the Sothern District of Illinois for $105 million!

After an extensive notification effort that include two first-class letters, an E-Mail and direct phone contacts, 1085 class action members filed claims seeking a portion of the $105 million settlement fund. Settlement terms and payments were based on the levels of contamination, the frequency of the contamination and other related factors. In general, the more water processed by a system and the higher the concentration of atrazine, the more money was awarded. Under the settlement, each water provider that filed a valid claim received $5,000, an amount that will cover the cost of about 20 water tests for atrazine.  IMPORTANT NOTE: Atrazine has a boiling point of 392°F (200°C) and is removed by distillation.  This is another good reason for owning and operating a Pure Water distiller.

Below is a map that shows the location of each water system receiving funds and the magnitude of their payments.  Systems with valid claims in Ohio saw about $9.9 million from the settlement. Those in Missouri followed with about $9.7 million, Kansas at $7.9 million, Indiana at about $7 million and Iowa at about $3.5 million. Lesser amounts were received in other states.

The amount each of the 1,017 claimants received under the settlement varied. The settlement amount, ranged from more than $1 million for three claimants to between $5,000 and $10,000 for 545 claimants. 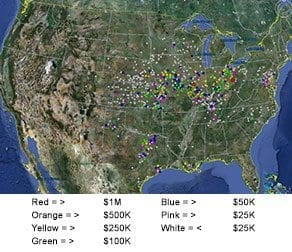