What is an Electrolyte? 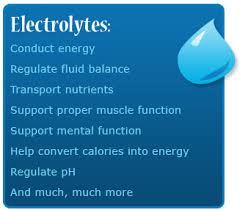 An electrolyte is any substance that forms ions (charged particles) when dissolved in suitable ionizing solvents such as water. (Positively charged ions are called cations and negatively charged ions are called anions.) Substances that ionize in water include most soluble salts, acids, and bases. There are a few gases that can function as an electrolyte under conditions of low pressure (or high temperature). A very good example of this is hydrogen chloride (HCl), a gas, which dissolves in water to form hydrochloric acid, a major component of gastric juices. Electrolyte solutions can also result from the dissolution of some biological compounds which contain charged functional groups. (Examples: DNA, polypeptides and some synthetic polymers)

An example of how an electrolyte solution is formed would be when common table salt (sodium chloride) is added to water. The individual components of the salt dissociate (break apart) due to the interactions between the solute (salt) and the solvent (water). Chemists refer to this process as solvation.

What is the physiological importance of electrolytes?

The primary ions (or electrolytes) of importance in human physiology are the following: sodium (Na+), potassium (K+), calcium (Ca2+), magnesium (Mg2+), and chloride (Cl−). The electric charge symbols of plus (+) and minus (−) indicate that the substance is ionic in nature and has an imbalanced distribution of electrons which is the result of chemical disassociation. Sodium is the main electrolyte found in the extracellular fluid (watery solution) and is involved in fluid balance and blood pressure control. There are subtle and complex electrolyte balances throughout our bodies that affect several life functions. For example, the ratio of potassium to sodium ions in the intracellular and extracellular environment of cells determines the state of hydration or dehydration of our cells and our bodies. In addition, such ratios (referred to as osmotic gradients) also affect and regulate blood pH as well as nerve and muscle functions. 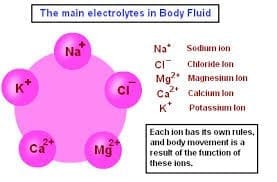 Fortunately there are various automatic bodily mechanisms in higher life forms (including mankind of course) that keep the concentrations of different electrolytes under tight control. Both neurons (nerve cells) and muscle tissue are considered electric tissues inside our bodies. Neurons and muscles are both activated by electrolyte activity which occurs between the extracellular and intracellular fluids.

Electrolytes can enter or leave the cell through specialized protein structures which are embedded in what is called ion channels in our plasma membranes. Without sufficient levels of these key electrolytes such as sodium, potassium and calcium, severe muscle contractions or muscle weakness may occur! Electrolyte balance is maintained by oral, or in emergencies, intravenous (IV) intake of electrolyte-containing substances, and is regulated by hormones, in general with the kidneys flushing out excess levels. Oral rehydration therapy may be necessary to replenish the body’s water and electrolyte levels after excessive exercise or excessive alcohol consumption. Electrolyte drinks containing sodium and potassium may be necessary in these situations. Other times when this therapy may be necessary is after bouts with diarrhea or vomiting.

This brings us back to the original concern. Do we depend on the water we drink for electrolytes and the answer is NO. No more than we depend on minerals in water for their other vital functions in our bodies. We depend mostly of our food, especially raw fruits and vegetables, for these very important nutrients…just as animals in nature do. If we do not feel that we are getting enough of these nutrients in our diets, we can take vitamin or mineral supplements (just make sure they are chelated or of the organic form). Then we can enjoy drinking pure, distilled water that will better help to deliver electrolytes (and minerals) to the proper locations in our bodies.

Some may argue about different kinds of water and the best water to drink, but we at Pure Water believe that the best water is distilled water.  Why?  Distilled water is purified through a natural process of heating water to create steam, and as the steam rises, it leaves nearly all particles and contaminants behind.  […]

When making baby formula, no water can compare to safe distilled water.  Both formula manufacturers and pediatricians recommend distilled water for baby formula because it is toxin and contaminant free.  Water distillers are able to remove 99.9% of bacteria, nitrates, viruses, lead and even uranium!  The most amazing aspect of owning a water distiller is […]

Distilled water is the healthiest drinking water available for people, so it makes sense to provide it for your furry friends as well! The process of distillation is entirely natural. A water distiller gently boils tap water; clean, toxin-free steam rises, which then condenses and is collected. The brilliance of distilled water is that it mirrors […]