Nitrates in water can cause blue blood syndrome and birth defects, as well as stomach and colon cancer.  Nitrates are mainly used in fertilizers for better crop production.  This can cause water quality issues, especially for people who live in states that are heavily involved in farming, such as Nebraska, Kansas, Iowa, South Dakota, North Dakota, Washington, California, and Minnesota.

Moreover, nitrates in well water are of particular concern and, as a result, well owners need to be particularly vigilant in caring for their well water prior to drinking.  Because of this, nitrate removal from water is becoming more of an issue in many areas as can be seen from the nitrate map below. 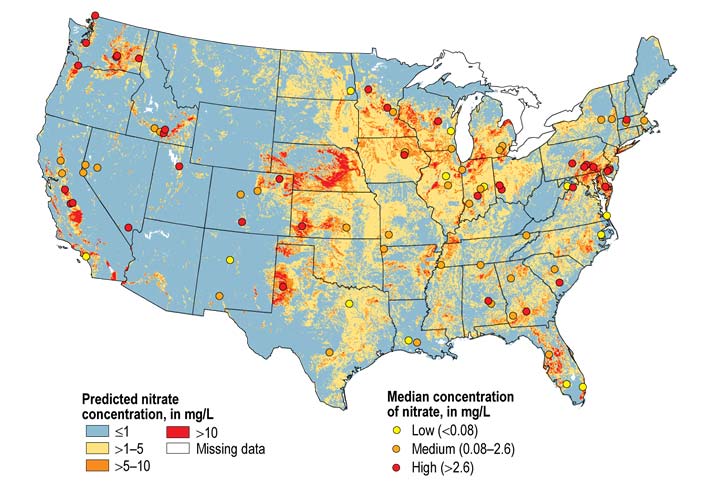 Nitrates are intentionally introduced into our environment for agricultural use. This is anywhere that field crops have been planted and harvested. This includes fields of corn, wheat, soybeans, alfalfa etc.  It would also include fruits and vegetables that are grown for commercial production as well as in home gardens. There are many applications for fertilizing turf and other landscape uses, including golf courses and parks, etc. as well as home landscapes. Some nitrates are intentionally used for making explosives.

Why are Nitrates in Drinking Water?

Nitrates and nitrites can be found almost anywhere to some degree, but they are intentionally introduced into our environment for agricultural use as noted above and can be found in the run-off water from over-watering field crops or gardens. Currently, attempts are being made to monitor and control the over-use and flow of nitrates as they often seep into shallow wells.  Additional areas where excessive nitrates and nitrites can be found are in the waste (feces) produced by hog, cattle, turkey and chicken operations.  Nitrates and nitrites are often found near wastewater treatment plants and in rural areas where septic tanks are in use or are being misused.

While this is a very dangerous condition for new-born babies and babies up to six months of age, it can also affect the mother and the elderly or anyone with a weak or weakened immune system.  If this condition is not quickly diagnosed, which it often isn’t, it can cause birth defects, especially during the first trimester of pregnancy.  Sadly, serious illness can result or even death!

If it is quickly and properly diagnosed it can be easily corrected by administration of oxygen.  According to research done at the Eppley Cancer Institute in Omaha, Nebraska, nitrites can also combine with amino acids found in proteins to form nitrosamines, which are generally considered to cause cancer, especially of the stomach and colon. 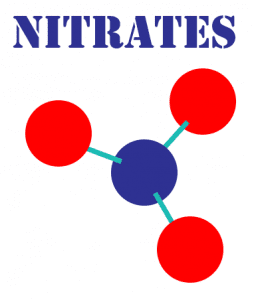 The EPA Primary Standard for nitrate is 10.0 mg/L (ppm) as nitrogen. (Federal limit is not a safe level)

The EPA Primary Standard for nitrite is 1.0 mg/L (ppm) as nitrogen. (Federal limit is not a safe level)

Methods of Nitrate Removal from Water

Virtually 100 % removal at all levels of nitrate/ nitrite tested and does not change over time.  NOTE: Boiling alone does not remove nitrates or nitrites but actually concentrates them.

Independent Lab Test Results for Pure and Secure Water Distillers:  Midwest Labs spiked* sample: 99% removal rate. *Spiked samples are those that have an increased amount of contaminant for the purposes of testing.

No effect on lowering the nitrate/nitrite level or most other inorganic compounds. Mostly effective for the removal of chlorine, some other gas, and some low molecular weight organic compounds.

Selective removal depending on what other negatively charged ions are present such as sulfates.  Not dependable.  Varies from fairly high to fairly low. (90% to 3 %)

UV (Ultraviolet) is not designed for nitrate/nitrite removal. Converts nitrates to nitrites which is not helpful.

Nitrates are inorganic chemical groups consisting of two or more elements, sometimes referred to as radicals or ions, that have unpaired electrons and therefore participate in chemical reactions.  In the case of a nitrate ion, the two elements are nitrogen and oxygen. The chemical symbol is NO3-1 and it is formed in nature, especially during a lightning storm, when two of the main gases in our atmosphere nitrogen 78% and oxygen 21% chemically unite.

Plants must have nitrates in order to grow. It is what gives plants their green color. Humans and other animal life do NOT need nitrate in order to grow and in fact, have the potential to cause bodily harm.

Nitrates are part of a nitrogen chemical cycle. When a nitrate ion loses one of the three oxygen atoms, it is transformed into a new ion called nitrite.  (NO2-1) This can happen in a couple of different ways but quite commonly when anaerobic bacteria steal one of the oxygen atoms from a nitrate ion. This new radical is very unstable.  It is hungry to get its lost oxygen atom back.  It is sort of like the legendary Dr. Jekyll changing into Mr. Hyde.  It goes from good to very bad!  It will seek to restore the lost oxygen atom wherever possible.  That is where the potential danger arises to the human body and many other mammals.

Nitrate and nitrite typically exist in the environment as highly water-soluble inorganic salts, often bound when not made soluble, to metal cations such as sodium +Na or potassium +K, and also for agricultural uses with the ammonium cation +NH4. The nitrate ion is the more stable form as it is chemically unreactive in aqueous solution; however, it may be reduced through biotic processes with nitrate reductase to the nitrite ion. The nitrate ion is also readily reduced to the nitrite ion by anaerobic bacteria in watery solutions and is part of a nitrogen cycle. By gaining back oxygen, the nitrite ion is oxidized to revert back to the nitrate ion, as explained previously.

Being part of an inorganic compound, the boiling point of these compounds will depend on the positive anion that the nitrate or nitrite is associated with.  The following shows the critical points for several selected nitrates and nitrite compounds.