Fluoride is very much in the news again as more and more of the dangers of fluoride come to light. In this article we will discuss the top dangers of fluoride.  From a historical perspective, I find it very interesting to note that the very first customer for a Pure Water distiller was a lady here in Lincoln that was part of a strong effort  to prevent the fluoridation of Lincoln tap water. (Unfortunately her efforts did not prevent fluoridation in Lincoln, NE) Water fluoridation has been banned in many countries including: China, Austria, Belgium, Finland, Germany, Scotland, Denmark, Norway, Sweden, the Netherlands, Hungary, and Japan. Nearly all of Europe’s water supply is fluoride-free. Why do we not find the United States included in the list?

Many people think they can drink distilled water and use fluoride-free tooth paste, like Toms from a health food store and be fluoride free. Unfortunately, fluoride isn’t just in toothpaste and tap water! It is also found in many items in the American food supply, because fluoridated water was used in its preparation.  Today the majority of American cities (70 % by the latest count) have fluoridated drinking water.

Foods that contain fluoride include most reconstituted fruit and vegetable juices (unless freshly squeezed), virtually all soda pops, beers and wines (unless they are imported from Europe or other areas that do not fluoridate), coffee (regular or decaffeinated) served in restaurants or at home, tea (both regular and herbal), commercial and homemade soups, most processed foods such as chicken nuggets and even baby formula and baby foods!! What a shame. Another hidden source of fluoride is food cooked or fried in Teflon coated cookware.  Even cigarettes contain considerable fluoride! Fluoride is all around us and most Americans are still not aware of the dangers. Even though they may have been exposed to the dangers, they do not accept the dangers or believe them. If they only knew they would no doubt change several aspects of their consumption. 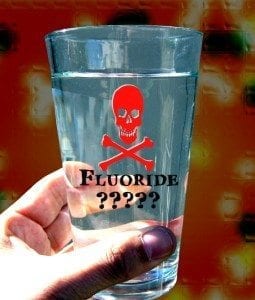 Are you aware of the health dangers of fluoride?  Do you know how to remove fluoride from water?  Perhaps there are some fluoride dangers that you don’t know about. For example, do you know that fluoride can damage fertility, destroy bones and cause early puberty in children? One of the earliest fluoridation trials in the U.S. (Schlesinger 1956) reported that on average, young girls in fluoridated communities reach menstruation 5 months earlier than girls in non-fluoridated communities!!?

Fluoride is not specific for teeth.  One of the more serious problems with fluoride is that it accumulates in other parts of the body.  It will tend to accumulate anywhere there is calcium and/or phosphorous, such as our bones and the pineal gland. Studies in both animals and humans, by Jennifer Luke (1997 and 2001), showed that fluoride, which accumulated in the human pineal gland to high levels, reduced the melatonin levels in subjects causing sleep disruption and earlier onset of puberty.

Healthy adult kidneys excrete 50 to 60% of the fluoride ingested each day, the rest accumulates elsewhere in the body. Babies and young children excrete even less fluoride through their kidneys and thus absorb and store up to 80% of the fluoride that they have ingested. Think about this. Fluoride concentrates in our bones over our lifetime and is one of the main reasons our bones harden and become brittle with age. This makes our bones slower to heal as we age. There is also research to show that the accumulated fluoride in bones may be a contributing factor in causing bone cancer, especially in young boys.

Even babies that are breast-fed receive fluoride, through the mother’s milk, if mom is drinking fluoridated tap water.  Bottle fed babies can receive even higher doses if formula is mixed with fluoridated water. Infant exposure to fluoridated water has been repeatedly found to be a major risk factor in developing dental fluorosis later in life. Because of this, many dental researchers are now recommending that parents of newborns not use fluoridated water when reconstituting baby formula.  In spite of this you will find some pharmacies and other retailers that sell “baby water” with fluoride added. They should realize that the American Dental Association (ADA), previously one of the biggest advocates of fluoridation, sent a November 6, 2006 email alert to its members, advising that parents should make baby formula with “low or no-fluoride water”!   This is a great advancement for the advocates of distilled water.

Fluoride given to animals at high doses destroys the male reproductive system. Fluoride damages sperm and increases the rate of infertility in a number of species according to numerous researchers. According to a U.S. epidemiological study, couples living in areas with 3ppm or more of fluoride in their water, showed increased rates of infertility. Two other studies have shown reduced levels of circulating testosterone in males living in fluoride areas.

According the National Research Council (2006), it is readily apparent that fluorides have the ability to interfere with various brain functions. In addition, the US Environmental Protection Agency (EPA) lists fluoride among some 100 other chemicals for which there is “substantial evidence of developmental neurotoxicity.” Experiments on animals reveal that fluoride accumulates in the brain and alters mental behavior (Mullenix 1995). There have been over 100 animal experiments showing that fluoride damages the brain and impacts learning and behavior.

Advocates of fluoridation counter that these animal studies are invalid because high doses of fluoride were used, but it takes 5-20 times more fluoride to reach the same plasma levels in rats as in humans (Sawan 2010). One animal experiment found effects at very low doses of fluoride (Varner 1998). In this study, rats were fed for one year with 1 ppm fluoride in their water (the same amount used in tap water fluoridation), using either sodium fluoride or aluminum fluoride. These rats had changes to their kidneys and brains, an increased uptake of aluminum in the brain, and the formation of beta-amyloid deposits which are associated with Alzheimer’s disease.

In addition, there have been dozens of studies from around the world that have shown a strong association between fluoride exposure and reduced IQ. The authors of a latter study reported that for each increase of 1 pppm of fluoride measured in urine there was a loss of 0.59 IQ points!

No article on fluoride

would be complete, in my opinion, without mentioning the name and works of Dr. John Yiamouyiannis, Ph.D (1943-2000).  John was a biochemist and a strong world-wide fighter against fluoride and for water distillation. He was the founder of the Safe Water Foundation.  John liked to call himself “the world’s leading authority on the biological effects of fluoride and for more than 25 years, he was. He wrote a number of books on various aspects of health, including his best-selling book,“Fluoride, the Aging Factor”.  In it, he states that fluoride, along with its many other faults, reacts with every enzyme and hormone in the body.   Fluoride negatively impacts both the thyroid and parathyroid gland. Lowering the thyroid function among otherwise healthy people causes premature aging. Symptoms of rampant and increasing problem of hypothyroidism include depression, fatigue, weight gain, muscle and joint pain, increased cholesterol levels and heart disease.

Skeletal fluorosis (a fluoride-induced bone and joint disease) mimic the symptoms of arthritis according to several researchers. (Singh 63,  Franke  1975 and Teotia 1976 to name just three). Wow! What doesn’t fluoride affect?

Thank goodness for Pure Water Brand distillers.   Distillation is the best and most reliably consistent way to remove fluoride from your drinking water.

Learn More About the Dangers of Fluoride

The Fluoride Deception by Christopher Bryson

The Case against Fluoride: How Hazardous Waste Ended Up in Our Drinking Water and the Bad Science and Powerful Politics That Keep It There by Paul Connett, James Beck, and H. Spedding Micklem